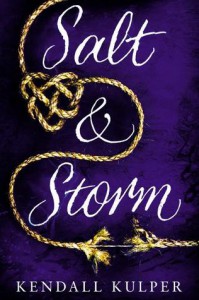 Salt & Storm is a creative debut with a great blurb and a top notch cover. Which is what makes my initial review:

My face is the personification of the : emoticon.

all the more disappointing. It’s not that Salt & Storm is a bad book. I applaud the author for trying something new with the standard supernatural love story and for creating a magic system with real consequences. But unfortunately none of that makes up for some very serious problems.

Avery is not a likable or relatable character. That’s not necessarily a bad thing, but I got the sense that the book thought she was. Despite the fact that she’s selfish and rude and has no interests or thoughts outside of escaping back to the witch’s cabin, she’s immediately adored by the love interest, rooted for by the townspeople, and captures the mind of a mysterious smuggler. The argument could be made that the townspeople never cared for her, only her status as the witch, but even so I felt like the book never saw Avery as badly as I did. Especially the way she treated Tane.

We need diversity in young adult literature, so I was absolutely thrilled to meet Tane, a Pacific Islander who is out for revenge when his made-up fantasy tribe was slaughtered while he was learning to be a whaler. While there are problematic elements to that backstory, it was when I learned that Tane’s magic comes from his traditionally carved tattoos that I became really upset. Without going too deep into history, what Captain Cook and his missionaries did to the Pacific Islands and their culture, including tattoos, is despicable. To take a lost art, especially in a time when people like the Māori are still struggling for basic rights in their home islands, and use it as a cheap and lazy backdrop for “strange” magic is not right. (Funny how all the “strange” magic in this book seems to belong to people of color.) Inking up your white girlfriend with no spiritualism or ritualism behind it, for the sake of magic, is doubly so.
Beyond that, I had a lot of pacing issues. For a book that constantly drills urgency following Avery’s dream, I felt like too much of the plot was stagnant. There’s also a lot of introspection following the climax and I wasn’t in love with how it was presented. I absolutely hated the final part, where characters reveal brand new motivations and apparently cheat death through the power of familial bonding. For such an angry book, it was schmaltzy.

I wanted so much better from Salt and Storm. The climax is ballsy, but the end didn’t follow through. The love interest is a person of color, but used in a lazy way. There’s interesting ideas explored in the magic system, but they could have played a larger role in the story. The only thing I really loved was the way the time period came alive. There’s some beautiful prose, especially when describing the whaling lifestyle. It’s obvious the author is talented and passionate, it just didn’t all come together this time around.